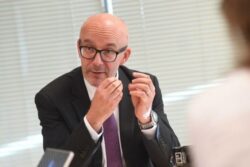 Matt Western is the Labour Party MP for Warwick and Leamington and has been since June 2017. He is Labour’s Shadow Universities Minister and represents many students and staff at the University of Warwick and Coventry University who live in his constituency.

Prior to entering Parliament Matt held various senior management roles during a 24-year career with Peugeot, both in the UK and Paris – specialising in finance, procurement and marketing. He also served as a Warwickshire County Councillor from 2013 to 2018.