On Behalf of Memona Shahid – The University of Manchester Students’ Union 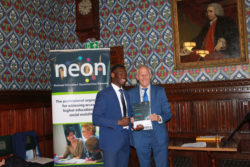 Working tirelessly since 2014 to make an invaluable impact to the educational journey of young people from her local area in Manchester. Memona set up a successful project (LIGHTSS) in Longsight that aimed to offer space for disadvantaged students to revise for their exams. She grew up in Longsight and recognised the need for a service that would help students to create networks and source resources to plan and deliver a project, due to a demise in local library study groups. Her initiative has reached 200+ students.

Memona not only takes a hands‑on and active role to support disadvantaged young people with their English, Maths and Science studies, she also goes above and beyond to support her peers.

Alongside running her project, she has also taken a very active role in the Access All Areas Committee, a committee of students who support student‑led Widening Participation projects.

She is an undergraduate Pharmacy student who is in the first generation of her family to go to university.